THE FOLLOWING IS A REPORT FROM KL7TS ……

Our RSOC Station Manager, TJ Sheffield (KL7TS) and BATMAN, Dave Webb (N9AIG) attacked the issue we had with the HF SAMS Loop antenna being caught up on one of the AB-105 tower guy wires at the RSOC today.

TJ climbed the tower and Dave acted as ground crew. They used the two Klein Tools “Chicago Grips” that TJ purchased from KF7P MetalWerx to get the 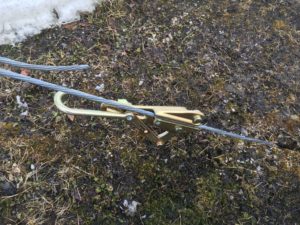 guy line down. Once they disconnected the bottom end, they laid the guy wire along the vertical face of the tower and TJ went up to about the 40′ level and “whipped” the stray wires on the guy fittings so it (hopefully) won’t snag the SAMS loop again. 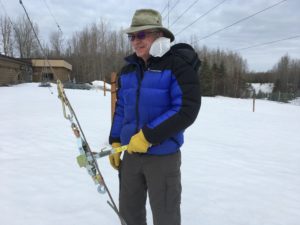 Dave brought his ratcheting wire rope come-along so they could take tension off the guy wire, then tighten it up again when they were finished.

Just a great example of our great member volunteers in action to keep the RSOC in super operable state! That Loop antenna is a great performer for our in-state NVIS needs on 80 through 40 meters and above.