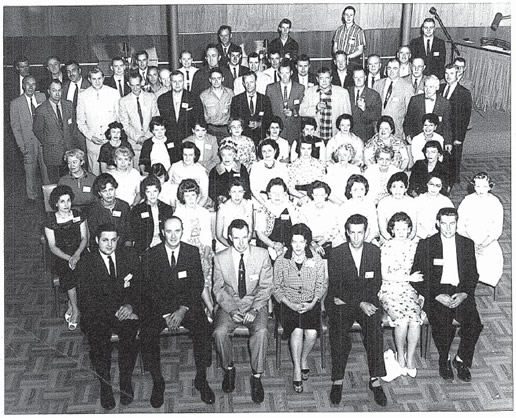 The Anchorage Amateur Radio Club, KL7AA was organized in 1947. The first meeting was held at the Fourth Avenue Theater. The first president was Dave Fulton, KL7AGU. Among those present were:
Founding Members

By 1950, the club moved to the KENI transmitter site. The meetings were held in the basement and the wives had a social meeting upstairs. The club station, KL7AA, was set up at this time, using a transmitter built by Jack Waldron and a long wire antenna. The club owned a code machine and a tape puncher, and code practice was run every night on 80 meters by club members. Around 40 people throughout the state listened fairly regularly. Many wives of members got tickets at this time and joined the club.
In 1953, a few meetings were held at Yukon Radio on 7th & I Street. When the Loussac Library was built, the meeting place moved to the city council chambers in the basement.  During this time, the Northern Alaska Emergency net was organized and met nightly on 3982. Around 30-40 people checked in regularly. This net provided essential communications to people living in the bush. Stations in town copied grocery lists and phone them to local stores, made plane and hotel reservations and relayed messages to and from the Lower 48 and the bush.

Of course, all of this equipment was used at hamfests and Field Days, but it proved invaluable during the 1964 Earthquake. KL7AA, as well as many other Amateur Radio Stations in the affected areas, were actively passing traffic to and from the lower 48 states throughout the recovery period.  It took better than 3 weeks for normal long haul communications to be restored in Anchorage and longer still in the smaller communities.  Throughout the period, Ham Radio was on the air in about ever town and village in the affected area keeping the lines of communications open.  This was a monumental effort by less than perhaps 100 people in Alaska and the Pacific Northwest.

A 2M net was organized around 1956 and met nightly in the fifties and weekly during the sixties. This was a Civil Defense HAM project. The control station was in the basement of the telephone utility building, and club members took turns acting as net control.

The Anchorage Radio Club’s participation in the Fur Rendezvous races began around 1958 and is still continuing. Stations were set up to take traffic for the states as well as man the checkpoints in the race. A large board showing the route of the race is set up on Fourth Avenue so spectators can see the positions of the racers.


In 1973, members of the VHF committee set up a 34-94 repeater at Del Wolfington’s house and put the antennas on his tower. This machine was a “junk box special” and surprised everyone by working. In 1974, a 22-82 repeater was set up at Stuckagain Heights. This has become the Anchorage link of the Anchorage-Minchumina-McKinley-Fairbanks repeater link. With this set-up, a 2M mobile station can contact another 2M station in Fairbanks with no special equipment other than a handheld transceiver.

In 1984, the Anchorage Amateur Radio Club through the leadership of Wilse Morgan, KL7CQ the Federal Communications Commission appointed the Anchorage Amateur Radio Club as its first volunteer examiner coordinator (VEC) in the United States. This program authorized December 1, 1983 allowed examinations for amateur radio operator licenses to be given by volunteer examiners drawn from the private sector. VE accredit volunteers administer the examinations and coordinate the entire program in a specific region. The Anchorage Amateur Radio Club was appointed the VEC for the State of Alaska, FCC Region 11. Today, the AARC VEC still plays an active role in the national NCVEC program through development of the Question pools used on the examinations and the AARC VEC continues to maintain the majority of the VE Examinations offered in Alaska. These programs are offered free of costs to all participating operators. The program has also been trying to prototype an online internet testing program to be available to remote Alaska.

Over time the Anchorage club and amateur radio operators throughout the state have continued to provide emergency communications when public systems fail and for public service events.  Here in Anchorage, we have supported Hope Cottages now known as Hope Community Resources for over 35 years both with the Walk for Hope and general charity donations.  The Anchorage Amateur Radio Club, KL7AA has been an active participant in many local public service events. Some of the local activities supported by Amateur Radio include:

Ham Radio operators have supported public events in Anchorage for over 70 years. With more than 1000 amateur radio operators throughout the Municipality including Eagle River and Girdwood, ham radio has the ability to provide communication coverage over the entire Anchorage bowl. Each operator has a radio, their own power supply and a general knowledge of emergency communications needed to provide emergency or priority communications traffic compliant with the Federal Response Plan National Traffic System. Amateur Radio is a key component in the State of Alaska Emergency Plan and the Anchorage Emergency Plan. With stations in both State and local Emergency Operations Centers we provide government liaison support when public communication systems fail.

With the use of our Command and Control Vehicle (CCV), ARES has the resources to provide interoperability to all agencies involved in this event. The CCV has multiple modes of communication. Our radios include VHF UHF radios needed to talk to local emergency services, Aviation radios needed to provide air to ground communication, Marine radios to provide communication support to US Coast Guard Auxiliary, Search and Rescue, digital packet communications, satellite operations and at least three HF stations concurrently. The CCV has the ability to be an Incident Command Center or event coordination facility if needed.