Scouting’s Jamboree-on-the-Air (JOTA) / Jamboree-on-the-Internet (JOTI) report that more than 2,500 have signed up to take part in the 2017 event over the October 20-22 weekend. This is the 60th JOTA, and there is still time to register.

For those getting on the air, a Scout Station Scheduling site is available, as is a Scout Camps on the Air (SCOTA) page to register your own station and arrange contacts. 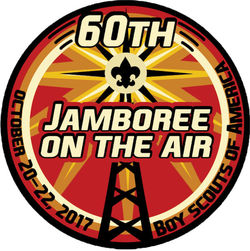 More Scout frequency information, including D-STAR, DMR, and IRLP, is available on the K2BSA website. JOTA organizers point out that these are only suggested frequencies. “Crowded conditions, including contests, will no doubt require that you move a few kilohertz up or down,” said JOTA Coordinator Jim Wilson, K5ND.

JOTA participating stations should take special care to avoid conflicting with any emergency response traffic activity under way in the Caribbean. In general, steer clear of any net traffic you might encounter.

A potential conflict exists between PSK and the new FT8 mode on 18.100 MHz, the frequency recommended for both modes. FT8 is the predominant activity at 18.1 MHz right now, and JOTA organizers suggest looking for PSK contacts on either side of 18.100. Read more.