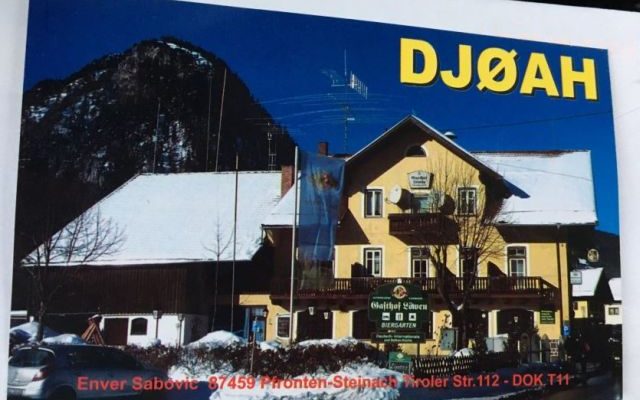 On Friday, I went to my PO Box to pick up my mail and immediately spotted an envelope from the Alaska QSL Bureau.  The Big Lake QSL bureau handles incoming QSL cards from all over the world and will collect, organize and then forward the incoming cards to your Alaska mail address for the cost of a postage stamp.  You simply need to send Big Lake a few dollars every once-in-a-while which they “bank” for your personal postage account.  QSL bureaus are run by volunteers who act as collection and distribution points for QSL cards, allowing them to group cards and decreasing the handling costs for you – the operator.  A wonderful and essentially free service for the active Ham.

There were 14 QSL cards in the envelope and I immediately spotted an anomaly.  A QSL card to KL7KC via myself (KL1JP) caught my attention.  I have myself listed as the QSL manager for the club hence the reason I received the card.  Historically, all the QSL cards sent to the club PO Box were seldom answered.  To rectify the problem (and minimize further complaints), I took that job on as part of the webmaster duties since for many; QSL card collecting is a passion.  Personally, I love the paper cards and especially the ones hand-drawn or from Short Wave Listeners (SWL).  There is another story about the two SWL cards I received this time too.

Before replying to any QSL card, I always verify the contact actually took place.  Oh yes, there are unscrupulous radio operators, who want that valuable Alpha Kilo (AK) QSL card to receive some sort of prestigious award.  Not in the log – then you don’t get a card.  That’s my motto.   Of course, digital logs are fairly easy to search while paper logs… Well. what can I say?  Perhaps “Don’t”   is the one word that comes to mind.  Some local Fairbanks operators have thousands of contacts a year.   How about you?

The card with the KL7KC contact was a very colorful card from Germany (DJ0AH).  I did a quick check on QRZ.com to read basic information about the operator.  Large antennas and a fair amount of beautiful paper DXCC certificates on his interior walls together with a nice write-up about his activities lead me to believe this guy was no novice – but a professional DX chaser.  He simply would not cheat!   [HINT #1].

Next examined was the date of the contact.  04/03/2016 @ 07:31UTC on 20m USB 59RST  states the back of the card.  Now, if that were a Field Day or perhaps a mistaken Skywarn contact then I would believe the KL7KC contact.  But 04/03?  That seemed rather odd to me.  Perhaps some AARC member was accidentally using the club callsign rather than their own?  Only a few AARC members are active so I decided to narrow the active Fairbanks operator list with some additional sleuthing.

Since the card states 04/03, I checked the contesting.com website hoping to get an idea of any active contests during that period.  Their website archive allows you to search the date of radio contests for previous years.  I dialed-in the contests that occurred during April 3, 2016, and found three contests worth noting.  A Spain DX contest, a United British contest but occurring only on 6m and a North American Sprint were listed.   [HINT #2]

Since I’m listed as the QSL manager, I eliminated myself as a possible recipient by checking my own digital logs.  There was an odd chance the card should have been sent to KL1JP rather than KL7KC.  My logs exist on my desktop computer, and within eQSL, LoTW and ClubLOG.  Checking there, I see no contact with the station DJ0AH in question.  So who else runs HF all the time?   Emails were sent to Larry (N1TX), to Eric KL7AJ (but he operates mostly as KL7EX), to Mike Sambuco (AL7KC) and to Wes (KL4SB).   [HINT #3]

Since the QSL card states 20m 59 RST, which means it was a voice/phone contact and not a CW contact.  That likely eliminates Larry and Wes leaving Eric and Mike.  If you’ve ever worked on HF and dealt with the foreign language issue, QRM, QSB, and 20m – all at the same time, it’s a sure bet you already can guess the rightful owner of the QSL card.  That, and the fact it is easy to incorrectly hear  “KLxxx”   instead of “ALxxx”.

I then fired off emails to Mike and Eric.  After a quick log check, Mike (AL7KC) did confirm the German contact at the specified date and time.   Puzzle solved.

Some additional information is noteworthy.  Had this actually been a KL7KC card, my next step would have been to reply to the German operator with an in-kind paper card.  I can do this in several ways, including the ARRL outgoing bureau service.  Personally, I use GlobalQSL as my outgoing QSL card printer and bureau.  For the cost of a few dollars, you can set up an electronic account allowing you to upload your ADIF contact list to their website.  You design your own card; front and back and have them professional print and then submit it to the appropriate out-going QSL bureau.  You simply cannot make it easier using paper cards.  If any of you have received one of my KL1JP/Bornite Alaska cards, those were printed and sent via GlobalQSL and they are gorgeous professionally printed and put simply – pretty cards.

The German QSL card will shortly be in Mike’s possession.  I’m handing it off to him to include in his collection.  Please feel free to stop by the Fairbanks Skywarn operation during the Special Event where Tracy from the NWS office has a wall-full of cool QSL cards sent to KL7FWX to show you.
Cheers
Dan (KL1JP, webmaster, and detective)

One Reply to “Sleuthing the Mystery QSL”