A caveat: I am not a technical expert. My goal here is to share some things that I have learned and show how I use some of the cool technology we have access to in the hope to spur others into potentially exploring something new.

Before I start talking about DMR (Digital Mobile Radio), I always feel the need to put it into perspective. I am not suggesting DMR (or any digital mode) is a replacement for analog or “older” modes. Also, new technology often requires us to sacrifice simplicity of operation to get the advantages of newer features and functionality (think about cell phones 20 years ago vs. today). Digital radio is just another tool in our toolbox, sometimes it’s the right tool, sometimes it’s not.

Why should you care about DMR? First, DMR is an open standard so you are not limited to one equipment manufacturer. This has resulted in lower-priced radios as compared to other popular digital modes. In addition, DMR also has better battery life than analog radios (~40% more TX time), signal error correction, multiple “talkgroups” per repeater, and two paths per repeater (see below). These benefits do introduce a level of complexity for the user, but they are worth the price of admission in my opinion.

How does it work? DMR radios don’t transmit a stream of modulated audio like an analog radio (unless you’re using it in analog mode of course). DMR radios contain a device called a vocoder. 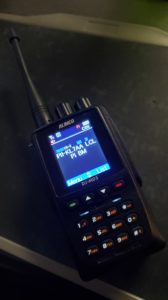 The vocoder takes the signal from your microphone and turns your analog audio into digital bits – 1’s and 0’s. These bits are sent in packets that include redundant bits to facilitate forward error correction and cyclic redundancy checks (FEC/CRC). Error correction is used when the received signal is less than perfect and allows the receiver to recover a certain amount of signal (data) loss. This results in the user hearing clear audio with no loss on a transmission that would have static if you were using an analog radio.

One other feature I want to highlight is the ability to have two simultaneous conversations on a single repeater. The system does this using a technology called Time-Division Multiple Access (TDMA). Here’s how I explain TDMA:  Bob and Fred are local hams that use a DMR repeater that is linked to some wide- 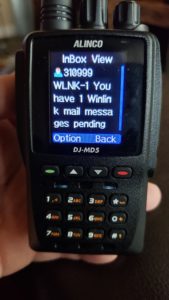 area system. Bob and Fred are both in Anchorage using the same repeater, and they are both currently transmitting. Bob is talking to a friend in Homer, and Fred is talking to a ham in Washington. The way the repeater handles both transmissions is by telling the radios to (very rapidly) take turns transmitting. Bob’s radio will transmit for about 30 milliseconds, then pause and allow Fred’s radio to transmit for about 30ms. This is all handled automatically and is transparent to the user. Bob and Fred just key up and start talking, and the radios and repeater handle the “traffic control”. These are called “Time Slots” and are set up when you program the radio. (This is also one of the major reasons DMR radios get better battery life since the radio isn’t always transmitting when you are pressing the PTT!)

That’s probably enough for now. Next time I will cover talkgroups and some other features of DMR.